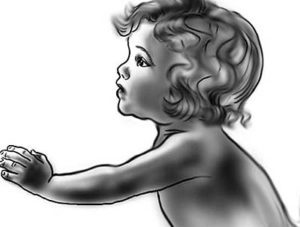 Most psychic adults were once psychic children. And most of us didn’t have good role models growing up, so it’s hard to know how to react to a psychic child.

It can be quite distressing and disruptive to the family if a sensitive child is seeing ghosts or sensing psychic trouble spots. Don’t get fussed yourself about the experience. It’s a normal everyday life experience for many people. Treat it as such. If you don’t get freaked out, it’s much less likely the child will react in kind. Don’t be over-impressed either. This is a normal human experience, it is best to treat it as such.

I’ve seen many parents over-inflate the ego of a sensitive child, leading to social disasters later on. It can also lead to a lot of pressure being placed on a child. I don’t remember who told the story, but one of the “big name” psychics on the Coast to Coast show told a story of being dragged from one funeral after another. She took it well, but some children might resent being put on display like that.

All the standard psychic protection steps that apply with adults also apply to children. You just have to reach them at their own level. One of the best methods I have heard was to get a spray bottle, put a sticker on it with “Magic Ghost Juice” on it, and fill it with distilled water, some glitter, maybe a drop or two of food coloring, and a few drops of essential oil (lavender is usually a good pick). If you really want to go all out, drop in a few rose quartz crystals. Then spray it around the room with a flourish and say something like “By this spray, I make all spirits go away!”. Give the bottle to the child and let them spray at will.

If the spirit or energy in a place is particularly heavy, you might want to do your own more serious “Ghost Clearing“. Out of sight and hearing of your child, of course.

Dealing with Curses More on Curses

Healing when you are on your own